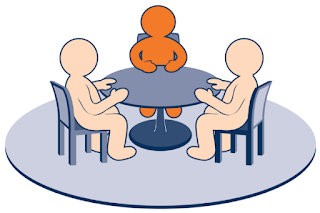 C. Sean Stephens had an excellent post this week in his Collaborative Divorce Northwest Blog about how the strategy of rushing into court to get a ruling on issues such as custody, possession schedules, support, etc. may be ill-advised. Not only is this blog one of the few dealing primarily with Collaborative Law issues, but it is always interesting and well written. This post gives the perfect example of how an attorney can misread a case, with bad results for their client, when a settlement process (here, mediation) before the hearing could have provided for an acceptable arrangement for both parties. Here's what he had to say:

"Sometimes negative examples drive home the benefits of collaborative practice the most. At Stephens Margolin P.C. we help clients with both traditional litigation cases and collaborative cases. As an Oregon lawyer practicing only family law, I frequently borrow from my collaborative law skills when working on traditional cases. The traditional side of our practice frequently reminds me of the benefits of collaborative law and the flaws in traditional practice. In our traditional cases, we usually attempt a four way style meeting and mediation prior to entering a courtroom.
"I recently made an appearance in a county which allows for hearings on temporary custody and parenting time before the parties mediate. The opposing attorney had filed for temporary custody without asking for mediation. I asked the other lawyer to mediate to see what we could work out prior to using the court’s time, but they refused. I would have been happy to have a four way meeting in our conference room and talk about some creative solutions, but they refused. Rather than mediate or negotiate, a hearing was held at the other lawyer’s insistence. The result was substantially worse for the moving party than they expected. Rather than a cooperative solution being reached voluntarily, the court imposed a decision on the parties that was harmful to the moving party.
"Refusing mediation or a face to face meeting was an enormous strategic mistake for the other lawyer. A more collaborative approach would have left the other lawyer with a happier client vs. a miserable client, and a better outcome."
Here in Tarrant County, we rarely do mediation before a temporary hearing, although it is done in some cases. (We tend to rely on mediation more for final orders.) There certainly can be a benefit to trying mediation before going to court any time. Even without mediation, it's usually a good idea to make every effort to come to an agreement before you go to court.
Sometimes, however, a party or attorney will come to believe that the facts of the case are all on their side and that they shouldn't waste time negotiating. I consider that sort of an old fashioned attitude. It's great to be confident, but you really lose control of the case when you turn it over to a judge to make a decision. It's always a gamble. Sometimes it pays off, but sometimes it doesn't. With high expectations of a favorable result, it can be devastating to a party if the judge picks up on something unexpectedly and rules the "wrong way"!
Sean is a Collaborative lawyer and like many Collaborative lawyers in Texas, he tends to use a Collaborative approach even in non-Collaborative cases. Usually, that is an effective approach. Parties should never approach a court hearing overconfident, because they are likely to be disappointed. A lot of heartache and anger can be avoided if the parties and attorneys will make a genuine effort to settle before they take a chance in court.
Posted by Dick Price at 10:02 PM

Nice title and I believe this topic should be more appreciated. I believe mediation is better than getting thing resolved in courts. I have mediated around 2,500 cases and I think I do not charge much as compare to Lawyers. Getting divorce cases resolved in courts may put you into depression and there are high chances that you get affected with heavy losses in terms of money and personal life.