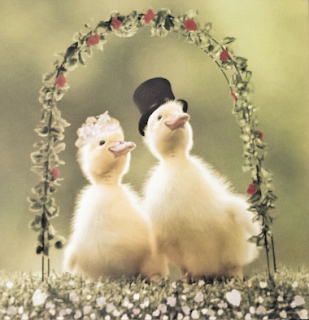 I didn't create the title to this post. It's a phrase I've heard around the courthouse for years, mostly from judges, social workers and therapists, to explain why both parties in a divorce are often afflicted with the same or similar problems. Even though the lawyers and other professionals usually recognize this phenomenon, the ones who don't realize it are the ones most involved. The ducks themselves. Our clients. I am writing this to clue in the ducks so maybe they will have an easier time navigating the family law system.

Family law legal issues usually range from very emotional to extremely emotional. Luckily, clients have attorneys to help them deal with the process. In litigated cases (in contrast to Collaborative Law cases), the parties and their attorneys often spend a lot of time preparing for court, or at least preparing for heavy negotiations. The attorneys always want facts from their clients. Some attorneys focus almost exclusively on the negative, while others try to balance the mud slinging by getting evidence/witnesses about the positive aspects of their client's situation (their hard work, honesty, generosity, willingness to change diapers, etc.).

Maybe it's easier to come up with negative things, maybe it's more emotionally satisfying, or maybe people think that negative attacks are more persuasive than just saying nice things about oneself. Whatever the reason, parties (and attorneys) tend to spend more time developing evidence of negative traits than positive.

And that's where the problem arises. In case after case, I see the same thing. It's "the pot calling the kettle black". Here are some common issues where I see it:
The old double standard is clearly alive and well. It's so much more fun to attack and criticize the other side in a family law case. Unfortunately, a lot of time and money can be wasted mounting attacks on issues that make both sides look bad.
What to do about it:

Remember, many of the issues you think are dynamite will fizzle out for a lot of reasons. One of the most common situations attorneys see is one party complaining about something that they are also guilty of, and that should be avoided. Ducks marry ducks and for many issues, there's virtually no benefit from bringing up issues that apply to both parties. Instead, look for things that will distinguish you in a positive way.
Posted by Dick Price at 9:12 AM

I think you're on the mark to a point, and in my early-years interactions with my ex-wife, I certainly contributed mightily to escalations. However, I also think it's overly broad to apply that philosophy to all cases since personality disorders so often drive family court litigation and it's not often/always both parties "equally" no matter how much the court or other outsiders like to believe that's the case.

The easiest way to demonstrate this in my own circumstances is that NONE, and I mean NONE of the issues that existed between my ex-wife in I during our relationship nor since it's demise exist in my relationship with my partner today. Is that because I've managed to so dramatically change myself or is it because I'm with a partner whose life doesn't revolve around high-conflict with anyone about anything?

One major life change for me is how I approach disagreements, as few as my parnter and I have. We talk things out rationally. We each state our respective positions. Sometimes, we don't resolve it, sometimes we do... but say our side and move on, quite quickly actually.

One thing I would contend based upon what I know, have experienced, or have learned through others is not so much that the accusations are often a two-way street (in whole or in part), but the most vociferous of objectors is usually the one guilty of what's being accused... whether it's substance abuse, physical abuse, mental abuse, irresponsible spending, hidden income, cheating, etc.

And when Family Court so often puts the burden of proof on the accused... well... you have a whole myriad of reasons why it's so hard to make headway in family court.

Overall, I think you have some valid points but ultimately it's only a small portion of what's what that is grossly complicated by the way the Family Court Cartel handles cases to keep the money flowing.